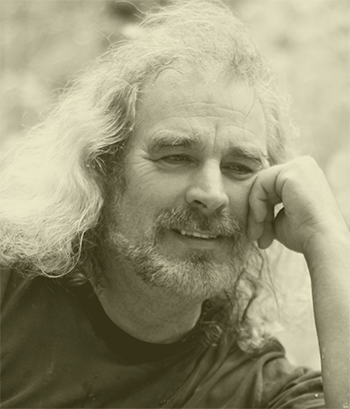 Jock Hildebrand is a graduate of Emily Carr University with an international reputation for large sculptural projects, primarily in bronze and stone. Having worked in Asia and Europe, as well as North and Central America, Hildebrand’s vision of sculpture has been gathered from his almost 40 years as a professional artist. Many of his ideas stem from his interest in anthropology and ethnology, as well as extensive travels. These influences are often portrayed in his works, but also interspersed and blended with his love of the ocean and the West Coast topography.

Hildebrand was founder and lead organizer of the Okanagan Thompson International Sculpture Symposium in 2002. This project left 20 monumental pieces of public art in the region. As a result, he was nominated by the former mayor of Kelowna, Sharon Shepherd, for the Order of BC, and in 2009 he received the Okanagan Visual Arts Award.

Jock has also lectured in China on sculpting in the digital age and worked as a consultant for the Government of Belize to assist with the establishment of a public art collection.

In addition to creating sculpture, Jock is also an accomplished painter in oils, acrylic and watercolour. In the 1990’s he was cited by Dr. Edward Gibson, Curator at the Simon Fraser University Gallery, as one of the three best watercolour artists on the West Coast, along with Toni Onley and Mark Tobey.

Over my 40 year career, I’ve been fortunate to have placed monumental sculpture around the world, receiving a number of international and national awards.

When not in my studio, I’m likely sailing my 52 ft wood ketch out of picturesque Maple Bay on Vancouver Island, where my wife, Carmen, and I make our home.